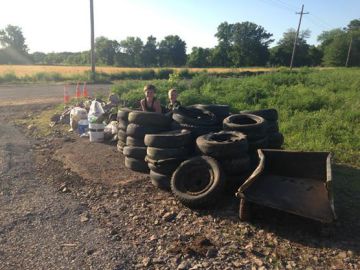 On Saturday, April 26th, two CJST volunteers cleaned up the area where
Blackpoint Road crosses the Raritan River as part the Raritan Headwaters
Association annual watershed-wide cleanup.  Several hours of work produce a
large pile of trash including 3 bags of trash, 3 bags of recycling, a
basketball, a roll of silt fence, a large mass of jumbled cable, a plastic car
bumper, a large inflatable rubber toy, some lumber, and 4 tires.  Two of the
tires, including a larger truck tire, were in the water and partially buried
and it took some effort to get them out.  Several more tires were located but
could not be reached because the water was higher.  These will be targeted
during one of our summer cleanups.  The most unusual items found were 6
cylindrical shaped plastic piece whose use is not known.  They are located in
the lower left of the picture if anyone would like to guess their use.

While the cleanup itself was successful, unfortunately the trash was not
picked up before the recent flooding and much of it was carried away by the
floodwaters. 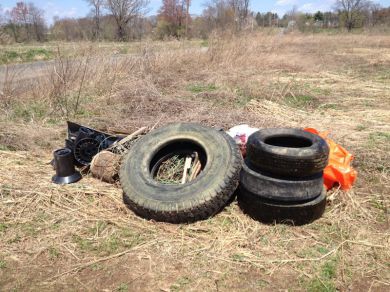